SSPX's Floriano Abrahamovicz: Jews are the People of the Deicide

So here we have yet another leader of the SSPX sect. He is Floriano Abrahamovicz, or Father Floriano Abrahamovicz to those willing to give credence to an SSPX's ordination. He is the spokesman for North East Italy of the sect. He says that he has Jewish origins on his father's side (may G'd help us).

In an interview with an Italian newspaper yesterday, Father Floriano Abrahamowicz, spokesman for the Society of St. Pius X in northeastern Italy, called the Jews “the people of deicide.” Insisting that the Society is not anti-Semitic-- “it’s truly impossible,” he said, “for a Catholic Christian to be anti-Semitic”-- Father Abrahamowicz nonetheless came to the defense of Bishop Richard Williamson’s “imprudent” comments on the Holocaust. Father Abrahamowicz added that he does not know how many Jews died in the Holocaust and whether the gas chambers were used for purposes other than disinfection.

The priest added, “If Bishop Williamson had gone on television to deny the genocide of 1.2 million Armenians by the Turks, I don’t think that all the newspapers would have talked about his statements in the same terms they’re using now. Who has ever talked about the Anglo-American genocide in the bombing of German cities? … And the Israelis certainly can’t tell me that the genocide they suffered from the Nazis is less serious than that of Gaza, simply because they’ve taken out a few thousand persons, while the Nazis took out six million. This is where I fault Judaism, which exasperates rather than honoring the victims of genocide decently. It’s as if there were only one genocide in history, that of the Jews during the Second World War.” The Jews, he added, are “the people of deicide.”

What does the Pope think ? The Jesuit magazine America carries a disquieting article. It suggests that the Pope is preparing a full-fledged rehabilitation of the SSPX people, essentially on their terms. Its seems that the notorious anti-Semitism of the SSPX seems to bother the Pope less than their ultra-conservatism pleases him.

Read also: Deborah Lipstadt's coverage of the SSPX story
Posted by Unknown at 2:57 PM No comments: 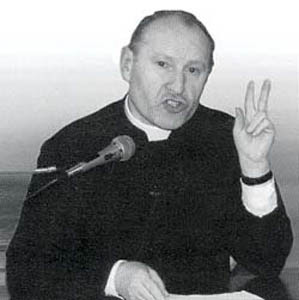 With the death of Jesus on the cross, the old covenant is abolished. The Church now encompasses all peoples, cultures, races, social classes. With that, not only are the Jews of our days not "our elder brethren in faith," as the Pope maintained in a visit to a Rome synagogue in 1986. They are, rather, guilty of the murder of God, insofar as they do not embrace the divinity of Christ and accept baptism, the only actions that would distance them from the guilt of their forebears. But Vatican II maintains, wrongfully, that the sufferings of Jesus cannot be attributed either to the Jews of His days nor to the Jews of our days (§ 4).

This is an excerpt from a letter sent by Fr. Franz Schmidberger to the Roman Catholic bishops of Germany in October 2008. Fr. Schmidberger is the German head of that very Society of St. Pius X (SSPX -- see previous posting) whose members have now been re-admitted to full communion in the Roman Catholic church by Pope Benedict.
Posted by Unknown at 9:34 PM 2 comments:

Posted by Unknown at 4:51 PM No comments: