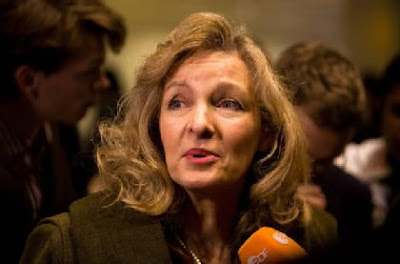 The Australian Queen of Beauty (Ret.) has arrived at Heathrow to support +Richard Williamson. Read a full report from the folks Down Under.
Posted by Unknown at 11:14 PM No comments:

Soo... Richie has been expelled from Argentina. He's off to Heathrow to meet his friend, the former beauty queen (and Davie Duke friend) Michele (one 'l' only, please) Renouf. 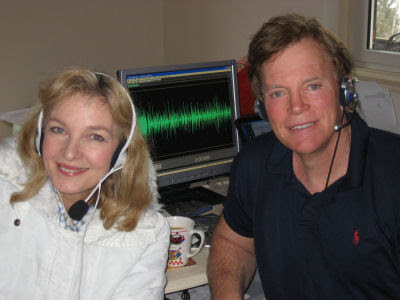 Beauty Queen (Ret.) Michelie Renouf and American pal Davie Duke
Now Michelie Renouf has hired the Australian Holocaust-denying lawyer Frederick Toben to represent The Most Reverend Williamson in his various legal and ecclesiastic travails. Ms. Renouf and Dr. Toben were members of the renowned Fact-Finding Committee On The Holocaust, appointed by the 2006 Iranian conference that found that the Holocaust never happened.

Now, don't misunderstand this arrangement. It is definitely not true that all these nice folks are anti-Semites. Nothing could be further from the truth. Ms. Renouf, for example, has said that she is definitely not anti-Semitic, no way, but she does allow that Judaism is a "repugnant and hate-filled religion."

Read more in the Times of London

Read the e-mail correspondence between Davie Irving and Richie Williamson

German Prelates Distance Themselves from Vatican 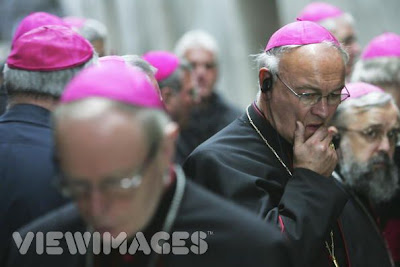 At least seven high-ranking German Catholic prelates have distanced themselves publicly from the Vatican on the matter of the anti-Semitic SSPX. While all statements have been respectful of the Pope, as indeed they need to be, none left a doubt that these high-ranking bishops, and in one case a cardinal, were dismayed by the anti-Semitic implications of the Vatican's reaching out to the SSPX sect.

These are the seven whose statements I have seen so far:

The German news service Tagesschau carries most of the details. The particularly strong statement by Cardinal Lehmann, demanding an apology from the Vatican, is reported by swr.de.
UPDATE, Feb. 4: Yet another German cardinal, George Kardinal Sterzinsky, the archbishop of Berlin, has critized the Vatican: "To lift the excommunication of the four SSPX bishops is, for most people, incomprehensible and outrageous," according to the report by Bild.
Posted by Unknown at 10:04 PM No comments:

Merkel, and Obama, about the Pope and the Holocaust

The Europeans are up in arms about the Vatican's rapprochement with the Catholic anti-Semites of the SPXX. Not so the Americans.

The New York Times's expert on religious affairs, Peter Steinfels, reports that American bishops have kept mum on that SSPX affair, in which Pope Benedict has revoked the excommunication by his predecessors of the] SSPX sect (see NYT, 1/30/09).

In sharp contrast, European bishops, at least one cardinal, and many lay Catholics and Catholic publications have sharply criticized this Vatican rapprochement with the SSPX. And not only Catholics. Europe's most famous daughter of a Protestant pastor, Chancellor Angela Merkel, has weighed in courageously.

The French and German press brings more details and commentaries on a daily basis. Since I read only German and French, I cannot comment on what the press of Italy, Spain, etc. may contain. But from what I see in Le Monde of France and Tagesschau of Germany, it appears that many prelates in Europe were moved to distance themselves from the Vatican and to reaffirm their solidarity with the Jewish community. The liberal press in these countries, which is often highly critical of Israel, nevertheless seems unanimous not only in condemning the old-fashioned anti-Semitism of the SSPX crowd, but also in expressing surprise that the Vatican has taken this startling initiative to placate SSPX.

These European liberals, obviously, have agendas of their own. In France, for instance, some of the SSPX folks were found among the ultra-right Front National; historically, the sect has been identified with the Petainist right wing in French politics. Moreover, the Vatican has annoyed the liberals again this week by appointing a right-wing auxiliary bishop in Austria, a certain Gerhard Maria Wagner, apparently against the wishes of the Austrian hierarchy. European commentators also point out that Benedict, while showing great indul;gence toward his right-wing, remains resolutely hostile toward the liberal and left-wing forces in his Church. English-only readers may wish to consult the English-language version of Der Spiegel, which recently featured a background article.

But, as is the case with Chancellor Merkel, European reaction cannot be reduced to political or theological liberalism. She is, remember, head of the CDU, the conservative party of her country. Hers is now the most conspicuous criticism of the Pope. She has publicly demanded from Benedict XVI that he explain clearly: is it or is it not acceptable, to deny the Holocaust ? According to Tagesschau, the Vatican has responded as follows: we have nothing to explain.

Now President Obama --- has he said anything ? I actually don't know.
Posted by Unknown at 2:42 PM No comments: