A Dove of Peace or a Pigeon of Death ? 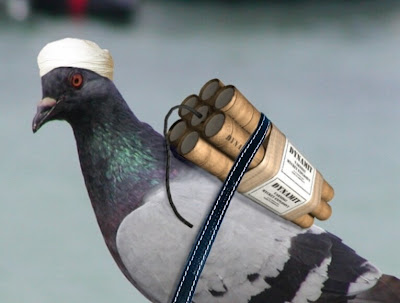 http://www.somaliradio.dk/images/Suicide-Bomber.jpg
It is notoriously easy to claim to be "for peace." Adolf Hitler himself made this claim, but not many today give it credence. On the other hand there does seem to be a market for a claim scarcely more credible, viz. that the random killing of civilians can be an instrument not only of peace but of a "just peace."

In the city of Vancouver on the west coast of Canada, a place where I lived for more than thirty years, a small group of people call themselves "Jews for a Just Peace." Some of these people are personally known to me. Some of them are indeed Jews but others are clearly not. At any rate, this JJP grouplet is devoted to denouncing Israel and praising those Arabs who make war on Israel. All that is fair enough if it weren't for the group's truly remarkable endorsement of random killings of Israeli Jews.

For some four years now, and despite repeated complaints, these self-styled proponents of a "just peace" have called for random, terrorist attacks in the streets of Israel.

In an "Open letter to Jews in Palestine" (their term for Israel), signed Khalid Amayreh, JJP warns that all Jewish civilians deserve death; in particular, they maintain, there is no such thing as a "personally innocent" Jew who lives in "Palestine" (i.e. Israel).

You, the Jews or Zionists (whatever you like to be called) have narrowed our horizons so much that you have made us feel that only two "choices" are available to us; either to die as suicide bombers or be slaughtered as sheep.

Therefore, I can dare say that blood of the "personally innocent victims" of the bombing is primarily on the hands of Sharon, Benalizer, Peres and other members of your diabolic government of assassins and war criminals

I won't give you the benefit of the doubt. I would be an idiot if I did.

This "Letter" is emblazoned with JJP's logo: a stylized dove of peace. A picture of the pigeon of death would be more truthful.

Also read: The Lying Tactics of the Anti-Israel Movement

Posted by Unknown at 3:13 PM No comments: