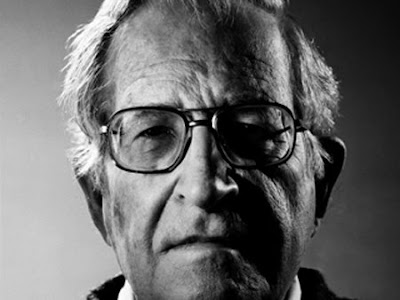 chrisduffel.wordpress.com
Professor Noam Chomsky has very enthusiastic fans, and also detractors. A great deal is written about him, a very great deal. But in all this material, it is his enthusiastic endorsements that reveal the most about him. Here I mention but three such cases: Churchill, Finkelstein, and, most important, Shahak.

1) Professor Ward Churchill has been fired from the University of Colorado for a variety of misdemeanors, most conspicuously intellectual fraud. Vincent Carroll of the Denver Post gives a good outline of what needs to be known about Churchill. With all that, Professor Churchill enjoys the full support, albeit couched in Chomsky-speak, of Noam Chomsky (as reported on Churchill's website):

Without reservations, I support Churchill’s right to free speech and
academic freedom, and regard the attack on him as scurrilous - and by
now craven cowardice as well, as the state authorities and other critics
pretend that the issue is (suddenly) his academic credentials and ethnic
origins. That’s a real disgrace.

As for his work, I’ve never read this article [on 9/11] and have no
interest in doing so–in fact, would not do so as a matter of principle in the present context, for reasons that go back to the Enlightenment origins of defense of freedom of speech. I was interviewed by Colorado
newspapers, and told them basically what I’ve just written. I was then
asked what I thought of his earlier work, and told the truth: that I found it serious and important, stressing again that these comments have
precisely nothing to do with the outrageous events now underway.
I have no idea what the plagiarism and other issues are, [but] if the
charges were serious, they would have been brought up before. For what it’s worth, there’s no indication of that in anything of his I read–that is, nothing more than is standard in scholarship. . . . . Such matters are sometimes raised in the context of political persecution, by cowards who are desperately seeking to conceal what they are really doing. Seems pretty transparent in this case. Why now and not before?

2. Dr. Norman Finkelstein's academic record roughly parallels that of Professor Churchill: fired for academic incompetence and for confounding extremist rhetoric with scholarship. (Click here for Paul Bogdanor's review of one of his books; click here for CAMERA's review.) But here is Noam Chomsky, calling Finkelstein "an outstanding scholar":


3. Finkelstein and Churchill are familiar to American newspaper readers. Not so Israel Shahak (1933-2001). By himself, Shahak would not at all be notable. He was an obscure instructor of chemistry in Israel, a Holocaust survivor, who, nevertheless, took it into his head that it was the Jews in history who were responsible for most of the calamities that have befallen the human race. I have reviewed his major opus "Jewish History, Jewish Religion, The Weight of Three Thousand Years some years ago; click here for this review. While some of Shahak's assertions are just funny ("Jewish children are actually taught" to utter a ritual curse when passing a non-Jewish cemetery; "both before and after a meal, a pious Jew ritually washes his hands....On one of these two occasions he is worshiping God... but on the other he is worshiping Satan..."), the bulk of his book is viciously anti-Semitic, no less virulent than the Nazis. And, indeed, all the major anti-Semitic crackpots of our day have taken him up as one of their heroes, the only truly good Jew that they can find.

And Professor Chomsky ? "Shahak is an outstanding scholar, with remarkable insight and depth of knowledge. His work is informed and penetrating, a contribution of great value." Noam Chomsky. Whatever else there is to be known about Noam Chomsky (there is a lot), this endorsement of Shahak is, to my mind, the most revealing.