Of What Use is the New Israel Fund ? 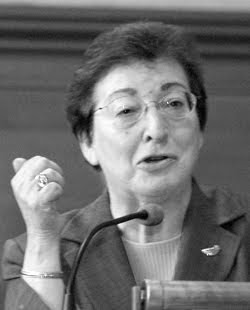 Ms. Naomi Chazan
President, New Israel Fund
It is almost thirty years ago that the French scholar Georges Lavau published his memorable study A quoi sert le parti communiste français ?, "Of What Use is the French Communist Party ?", with the question mark on its cover five times as large as the rest of the title. (Click here for a French-language review). No, Lavau found, the CP does not in any way live up to its declared aims of proletarian revolution, human brotherhood, or social betterment. But nevertheless, he says, the Party has its functions -- mainly one of providing a venting place for the dissatisfied in the larger society; in this way, according to Lavau, the CP promotes social stability.

The idea of piercing behind professed aims to examine the reality of a social institution did not originate with Lavau. Nor did it originate with the American sociologist Robert K. Merton (1910-2003, born Meyer Schkolnick), who introduced the terminology of "manifest" versus "latent" functions. But Merton's terminology is useful as a handle. I am using it here to ask: what is manifest, and what is latent in the New Israel Fund ?

The New Israel Fund (NIF) is the leading organization committed to democratic change within Israel. Since 1979, NIF has fought for social justice and equality for all Israelis. We believe that Israel can live up to its founders' vision of a state that ensures complete equality of social and political rights to all its inhabitants, without regard to religion, race or gender.

Widely credited with building Israel's progressive civil society from scratch, we have provided more than $200 million to more than 800 cutting-edge organizations since our inception. What's more, through our action arm, SHATIL, we mentor, train and lead Israeli civil society in an ongoing struggle to empower the underprivileged.

Democratic social change. Social justice. Equality. Sound familiar ? And ah yes, "progressive civil society" -- we've looked at that one in the previous posting. As for the "cutting-edge" organizations that NIF has financed, these are better known for their accusations of Israeli "war crimes" and, in effect, their work to demolish Israel (see my postings of 2/11/10 and 4/8/10). Are any of these eight hundred groups, over and above the demonstrated anti-Israel agitation of at least some of them, involved in any discernible efforts for "complete equality of social and political rights to all its inhabitants, without regard to religion, race or gender" ? I would not rule that out, but I am skeptical. The politics of NIF-supported groups are clear, their humanitarian impact, if any, is not clear to me.

In the meantime, there are many groups in Israel that do indeed work "to empower the underprivileged" and who do so without the political baggage of NIF. Two of these come to mind immediately: the Tel Aviv Foundation and the Jerusalem Foundation. Both are well established and have long records of work among the poor, both Arabs and Jews, work that they have done without fanfare and without public grandstanding. I would urge the reader to consult the websites of each. Moreover, the UJA-Federation of New York supports numerous groups in Israel devoted to the needy there, some of which are specifically organized for Arabs and other minorities.

About a year ago my wife Rita and I visited the Bialik - Rogozin School in Yaffo, which is supported by the Tel Aviv - Yaffo municipality. We found young children of many backgrounds studying in this very modern, well equipped Israeli institution. I was particularly struck by the many black faces from Africa -- six and seven-year olds -- all speaking Hebrew like sabras. They were children of African refugees, some of whom were in the country as undocumented immigrants. "This is the only place on earth where refugees from Darfur and other African countries are treated like human beings," a woman there remarked. While I was at the school and witnessed the colorful array of faces, I kept thinking of Jimmy Carter, who had just written his strange assessment of Israel as practicing "apartheid." I kept asking myself, is Carter just ignorant or is he malicious ?

So, well, no, we do not need the NIF to "empower the underprivileged" in Israel.

The NIF may or may not be helpful to underprivileged people in Israel, but it is well documented that it is definitely helpful to another group -- the extremely privileged. According to the group's 2008 IRS Form 990, it paid top salaries to at least two of its US-based officials: $228,331 to Larry Garber, then its CEO, and another $235,408 to Aaron Back, listed as "independent contractor." These payments are not much when compared to incomes of bank executives or even to those of executives at certain other Jewish groups. But these NIF salaries are more than twice as high as those of full professors of major universities. It places the recipients in the upper two percent of American households, assuming that they are sole wage earners. These are 2008 figures, the last that the group has provided to the IRS. Mr. Daniel Sokatch, the current CEO of NIF, has not responded to my request for the current salary structure at his organization.

So we know that NIF money goes to support Arab campaigns against Israel; it goes to pay for upper-middle class lifestyles of its officials. What else does it buy ? Nothing that can be definitely documented, but I would not dismiss feelings of satisfaction to donors whose political proclivities coincide with those of the NIF leadership. Whatever else may be said about the NIF, it is obviously far more political than eleemosynary. For prospective donors whose motivations are charitable, NIF is a good group from which to stay away.


Read the important Im Tirtzu report on the NIF

Read the NGO Monitor report on the NIF

Read the NGO Monitor's Ethical Guidelines for the NIF

UPDATE, Sept. 22, 2010: NIF makes contradictory claims; continues to send about $10 million a year to anti-Israel groups
Posted by Unknown at 11:00 AM

Frankly, I don't know if the salaries issue is a fair criticism or not, but we both know that your argument with the NIF is not really about this.

Carter's "apartheid" book was sloppy and troubling in its presentation of facts, but it was also widely misinterpreted. If you had paid heed to interviews with him, you'd know that Carter never contended that Israel is an apartheid state. In fact, he regards Israel within its pre-1967 borders as a "liberal democracy." His points were two-fold, both valid: that the settlement project in the West Bank resembles apartheid, and that if a two-state solution is not arrived at soon --before Arabs outnumber Israelis from the Jordan to the Mediterranean--Israel will look increasingly like an apartheid state, where a minority rules over a majority.

"Apartheid" refers to a policy of racism. Carter knows this. And to say that Israel has a policy of racism is untrue. Carter knows this too. In some interviews after the publication of his book he has tried to wiggle and obfuscate. But there is no truth in his campaign against Israel, nor is there honor. The best I can say for him is that, like Helen Thomas, he is getting on in years. No doubt that counts for something. The question is: for what ?

Cool post. I think I’ll get the Magic of Making Up!!!!