Is Mahmoud Ahmadinejad an Israeli Agent ? 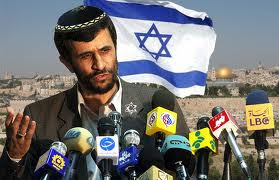 To begin: No, I do not think that the Israeli government, or American Jews, or the American government, or the neo-conservatives, or anyone like that is paying Mr. M. Ahmadinejad to behave as he does. On the other hand ...

Mahmoud Ahmadinejad is known for brash rhetoric in addressing the West, but in a speech Sunday he went a step further using a deeply offensive insult in response to U.S. statements that the military option against Iran is still on the table. "May the undertaker bury you, your table and your body, which has soiled the world," he said using language in Iran reserved for hated enemies. Washington Post, 10/3/10

Denying the Holocaust, threatening to wipe out Israel, threatening the lives of the US leadership, habitually using extremely foul language, etc.,etc., Mr. A has accomplished what AIPAC, Mosad, and ZOA combined can only dream of: he has made the enmity of Israel look repugnant. Now, the logic of conspiracy theorists and Truthers is cui bono ?, or the doctrine that whoever benefits from an action is ipso facto the originator of that action. Ergo: Mr. A. is paid by the Zionists.

Too much Latin in this posting ? Check your handy Directory of Latin Quotes and Latin Phrases.