The "Rabbis" of the "Jewish" Voice for "Peace" 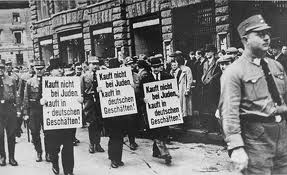 4/1/1933. Nazis inaugurate the Holocaust by putting on a Day of Boycott: "Don't Buy from the Jews"

OK, you hate Israel. You want to punish Israel, to boycott Israel, even as the Nazis began their war against the Jews by a "boycott" of Jewish enterprise back in 1932. Boycott, divestment, sanction. Punish the Jews !

But how can you contribute to this cause in a novel way ? As a beginning, call your campaign one of "peace." The word "hate" has a bad reputation, so look, call it "peace."

Second, hey, here is a new concept. Call your group "Jewish." Why not ? Is there a law against calling yourself Jewish ? Besides, so many of your friends are Jewish. And come to think of it, there was this old aunt ….

Now we're on to something. Just one more thing: can we get a Rabbinical Council of some sort to make it all legit ? Great. The Jewish Voice for Peace is born, Rabbinical Council and all, to demand the dismantlement of Israel, pronto.

I know, all this sounds like a joke, but in fact it's dead serious. So serious that the Anti-Defamation League has just named this "Jewish Voice for Peace" as one of the top ten anti-Israel groups in America. Click here for the ADL report on the group. And click here for Adam Holland's earlier report.

This JVP, how many members does it have ? Holland thinks there may be about a thousand, but there is no way of telling for sure. And of these, how many are Jewish by some reasonable definition ? I do not know, but the group itself, on its website, says that it includes "many non-Jewish Americans." Ah, "many,' that great flexible adjective so beloved by the evasive. "Many" can mean anything from 'quite a few,' to 'the majority,' to 'almost all.' Which is it, JVP ?
I will not guess. But there is no need to guess about the "rabbis" who are listed by JVP as members of its "New Rabbinical Council." As we shall see, sixteen out of these twenty-seven Rabbinical Council members, or sixty percent, cannot, by any reasonable definition, be called Jewish rabbis.

Here are some excerpts from the website of one of these, whom I shall call X., which, broadly speaking, illustrates the problem:

Rabbi X. received סמיכה (Smichah, Ordination) in 1977. In keeping with the ancient Talmudic and early Hassidic traditions, he did not attend Yeshivah (Seminary); rather, in 1970, he attached himself as a student to Rabbi Y. of New York and studied under the direction of Rabbi Z. and Rabbis A. ז”ל and B. for some seven years. Finally, in 1977, when his teachers determined that he was ready, they ordained him a rabbi.

In the early 1980s, Rabbi X. served for two years as the spiritual leader of Temple C., a Reform congregation in D.. He has also led less formal fellowship groups (havurot) in Washington, D.C., Atlanta, Georgia, and Fort Lauderdale, Florida. He served for eight years as a hospital and hospice chaplain, with a specialty in Mental Health Chaplaincy.

Rabbi X. has taught classes and led workshops and seminars at churches, synagogues, and other spiritual centers throughout the United States and Canada. His subjects have included Kabbalah (the Jewish metaphysical tradition and the foundation of all Western mysticism), Self-Esteem, Prosperity, Forgiveness, the Metaphysical Interpretation of Scripture, Spiritual Tales of Many Traditions, the Divine Commandment of Non-Violence, the Unity of Religious Traditions, and many related areas. His audiences have included synagogue groups, Silva Mind Control Centers, Vedanta Centers, and Episcopalian, Presbyterian, Baptist, Methodist, Catholic, Lutheran, Unity, Religious Science, Science of Mind, and Divine Science churches in twenty-seven states, the District of Columbia, and three Canadian provinces.

When asked about his approach to Kabbalah, Rabbi X. asserts that, while Kabbalah is clearly and unmistakably the Jewish mystical tradition, it is also much more than that. Unlike many other religious traditions, whose mystical elements are hidden or consigned to the status of an additional or peripheral aspect, Judaism's mystical aspect is its heart and soul, its essence, its very life-force. Furthermore, Kabbalah, in addition to being the heart of Judaism, is also, as Rabbi X. puts it, "a body of ancient and universal mystical wisdom which, while preserved in a Jewish form, is applicable to every religious tradition."

In describing his own theological orientation, Rabbi X. declares, "I am a Jewish practitioner of generic religion. As a G*d-worshipper, I believe, I ought to be at home any place G*d is worshipped. At home, not just a visitor." Religion — all religion — is intended to be a force to bring people together — together with each other and together with G*d — and not to drive them apart. All our many Names for G*d do not divide G*d and should not be permitted to divide us. Separations and divisions are inherently irreligious acts.

So much for "Rabbi" X. Of the twenty-seven of JVP's Rabbinical Council, eight are identified as rabbinical students, and another Council member is said to be a cantor. That leaves eighteen who are said to be rabbis. Of these eighteen there are three who appear to have had a standard Reform Jewish ordination, but one of these three, now aged 89, is long retired. In addition to these three with apparently traditional rabbinical training, there are eight who seem to have received training and ordination at the Reconstructionist Rabbinical College. These eleven -- three Reform and eight Reconstructionist -- would all seem to have some claim to be considered Jewish rabbis.

The distribution of these JVP rabbis along denominational lines, then, is as follows: Reform: 36%; Reconstruction: 73%; Conservative: 0%; Orthodox: 0%. We can compare this distribution to that of synagogue-affiliated American Jews, who, according to the 2002 American Jewish Population Study, are 33% Reform, 3% Reconstruction, 21% Orthodox, 33% Conservative, and 4% other.

Seven of the members of the JVP Rabbinical Council, or 39% of those for whom there is a claim of rabbininal ordination, were privately ordained -- essentially self-ordained, like Mr. X above.

Self-ordination is of course a general feature of the less savory aspects of American public life. Politicians and others sometimes refer to themselves as the Rev. This or the Rev. That, often with little more justification than that of Mr. X., pardon me, Rabbi X. There seems to be no law to prevent this silly self-aggrandizement, and often little harm is done; few are seriously misled. But here, in the case of the "Jewish Voice for Peace," something much more sinister is involved: an audacious, very energetic, very well financed initiative by enemies of the Jews to create an appearance of substantial Jewish support to them. I do not believe that there is such a substantial support. If there were, the JVP would have had no need to fabricate one.

Finally, there are other indications that the JVP leadership is highly unrepresentative of Jewish life. The group's IRS Form 990, showing its board members and other interesting information, lists five women among its trustees. Of these, two are also identified on the Internet as involved with Lesbian causes. But none, as far I can see, are concerned with such humanitarian issues as hunger, oppression, or disease in Africa or other parts of the Third World. I cannot tell all the possible areas of private compassion of these JVP leaders, but as far as the public record is concerned, none of their compassion is expended for Jewish targets of Islamic terror, for example, or indeed for anyone at all except Palestinians.

Read Frontpagemag's report on JVP
Posted by Unknown at 6:19 PM