The world is flat ! The moon is made of green cheese ! 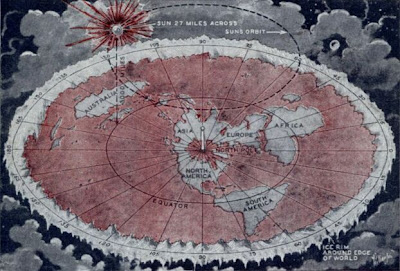 Do you have a sincere belief that the world is flat ? The University of Toronto will give you an M.A. for saying so. Do you think the moon is made of green cheese ? Ditto. Do you think that Jews, though they may look like humans, are actually pigs and/or monkeys ? An M.A. -- perhaps a Ph.D. -- is yours, again, of course, compliments of the U. of T. And, it goes without saying, compliments of the Ontario taxpayer.

Or so it would seem, judging by how the U. of T. has replied to critics of the MA that it awarded to Jennifer Peto. That MA, it will be recalled, held that the Jews of the world, mainly through Holocaust education, oppress the "people of colour" throughout the world.

Those who criticized this MA made three points, in order of importance:

1) The thesis was devoid of scholarship

The U. of T. has now answered all three of these criticisms in a statement that may be condensed as follows: We believe in freedom of speech; to us freedom of speech is absolute. You, the critics of the thesis, are out to suppress academic freedom. Neither integrity of scholarship, nor indeed scholarship of any sort seems to enter the U. of T.'s thinking. Here is the statement, as reported by the Canadian Jewish News:

Responding to a request for an interview, the University of Toronto issued a written statement by vice-president and provost Cheryl Misak: “Due to our privacy obligations to students, I cannot discuss an individual student’s academic work or his or her performance. What I can, say, however, is that freedom of expression issues are ever-present in our society, especially on a university campus. The University of Toronto’s Statement on Freedom of Speech makes it clear that freedom of inquiry lies at the very heart of our institution: ‘all members of the University must have as a prerequisite freedom of speech and expression, which means the right to examine, question, investigate, speculate and comment on any issue without reference to prescribed doctrine, as well as the right to criticize the University and society at large.’

“Of the thousands of MA theses written at the University of Toronto in partial fulfilment of degree requirements, it is inevitable that some will have elements that offend various individuals and groups. In such cases, the university is committed to allowing and encouraging a full range of debate. The best way for controversy to unfold is for members of our community to engage with the perspectives and arguments they dispute. It is intelligent argument, not censorship, that lies at the heart of our democratic society and its institutions.”

I have received similar statements from the President of the U. of T. and the Dean of OISE (see below for the link to this correspondence). In each instance, these University officials made the insulting suggestion that the critics of Ms. Peto's thesis are motivated by a desire to restrict freedom of speech. Neither President nor Dean took notice of the fact that the criticism of the thesis concerned its scholarship, not its point of view.
I cannot believe that this can be the final word from one of the world's great universities. The many great scholars there, and the friends of the University around the world, simply cannot allow this to happen.

See my correspondence with U. of T.'s President Naylor and OISE's Dean O'Sullivan.

I'm very impressed with your efforts Dr. Cohn, even if the U of T ivory tower mullahs are doing their best to sweep it under the rug!

Thank you very much for taking the time to speak your mind about this issue. Please don't give up. You have inspired me to contact the Dean of OISE and the President of the University of Toronto as well. I am a student at the University of Toronto and I find it abominable that these ideas can be revered by my institution. I may be contacting my own faculty dean to express my views, although it can get sticky there.

Your examples of pigs and green cheese are grotesque, and unprofessional.
Zionists do not have the moral high ground. They grovel in a swamp of misinformation and slander while turning a blind eye to the gross injustices against Palestinians.
The Jewish people are shamed by the actions of Israel. At least Canadian Jews should not add to that shame.
Attacking a Canadian student to protect your beloved Israel is shameful. Why are you living in Canada? How can you call yourself a teacher?

So, you are telling us that this hysterical campaign against a MA student has absolutely nothing to do with the geopolicics of victimhood and Israel, but is, in fact, a call to improve the quality of education?

The education level of those who have waged this campaign has visibly not taught them something useful.

Those who specialize in selling hypocritical arguments and propaganda, day after day, end-up as grotesque clowns.