For OISE, the Peto thesis was no aberration 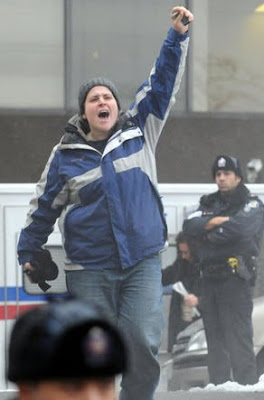 Ms. Peto of SESE, doing what SESE
does
Adapted from Toronto Star
The University of Toronto has now backed down on the subject of the anti-Jewish Peto thesis, if only just a little and if only disingenuously. When the story first broke, U of T officials insisted on the following mantra: the thesis is fully protected by principles of freedom of speech. Period. Criticisms from outside scholars stating that the thesis has no scholarly merit, regardless of its point of view, were simply ignored. Instead, U of T officials kept suggesting that the critics were motivated by a desire to suppress freedom, that they are, more or less, Fascists. Offense was the U of T's defense.

Now the tone has changed, a little:

U of T provost Cheryl Misak said she has been “a little alarmed at the kinds of things being said about a piece of student work.”

“It would be a good idea for us all to remember that it’s a student paper,” she said Tuesday. “I don’t know this student, but I certainly wouldn’t want to see this kind of scrutiny and unhappy attention on students in general.” (According to a report in the Toronto Star)

"So," Ms. Misak seems to say, "well, yes, maybe this thesis isn't so perfect after all, but come on, it's a student paper, you know, and students will be students." Wrong, Ms. Misak. Surely, being a provost, you know the difference between a "student paper" and an officially imprimatured M.A. thesis ?

The Star now tells us that Ms. Peto's work has received unfavorable attention in the Ontario legislature, and not a minute too soon. But the Peto thesis is no aberration at OISE, and the public's attention should not be confined to it. On the contrary, the thesis is unfortunately rather typical of what is done at OISE, at least in OISE's Department of Sociology and Equity Studies in Education. As we shall see, OISE, or at least SESE, often resembles a political cult more than an institution of higher learning.

1) Peto's thesis supervisor, Sheryl Nestel, supervised at least one other recent anti-Jewish MA thesis, by a student called Griffin Epstein (2009). I find this work a totally incoherent anti-Jewish rant, a piece of free association without any pretense of academic argument. While it has less structure and less neo-Marxist rhetoric than Peto's thesis, the basic ideas are strikingly similar: the Jews are a racist bunch, responsible for the death of innumerable Palestinian children.

2) I have looked at the abstracts of the thirty-six SESE theses available online (including one supervised by Nestel in a different OISE department). I found eighteen of these to be so full of leftist position-taking that it would appear, prima facie, that there is no attempt at scholarly detachment in these works. I did not find anyone who professed a conservative, or Christian, or, G-d forbid, a Zionist point of view.

3) The website of SESE maintains that the Department is, in fact, a "constitutional democracy:"

The department of Sociology and Equity Studies in Education (SESE) is organized as a constitutional democracy with a General Assembly and Standing Committees which provide policy and decision-making in departmental programs, selection of incoming students, etc. .... Our constitution is based on one person/one vote, and everyone in the Department (staff, faculty, and registered students) has voting rights and is welcome to participate in the General Assembly.....

Does that mean that the students vote on academic matters, on equal footing with faculty ? That would be a bit curious, to say the least. And more in line with a political movement than with a university department.

4) The cult-like terminology that I found in the MA abstracts is also used by faculty, including the Department Chair, Professor Rinaldo Walcott. Professor Walcott's specialty is "Black queer theory." And at least six of the SESE teaching staff, including the Chair, can be seen together as a cozy bunch when signing anti-Israel pronouncements and petitions (the statements I have checked are dated 1/27/09 and 2/27/09; obviously there are many more that I could have consulted).

So here are my conclusions:

A) SESE, and perhaps even OISE as a whole, is a nice warm place for those who agree on a radical left-wing worldview. There is a lot of "freedom of speech," as they would put it, for these co-thinkers. There does not seem to be much of that freedom for others.

B) SESE, and perhaps even OISE, is more of a cult than an institution of higher learning.

C) Obviously, these nice folk have every right in the world to believe and to proclaim that Israel is evil, or that the moon is made of green cheese. But do they have a right to i) call themselves scholars ? or to ii) conspire to have the Ontario taxpayer finance their nice little cult ?

D) Perhaps it's time for the U of T to cut itself free from its OISE encumbrance.

Labels: Ontario Institute for Studies in Education, Toronto University of

On Academic Freedom and Academic Witch Hunts - Part One

As a graduate of OISE, I am increasingly alarmed by the growing smear campaign against my alma matter (OISE, and by extension, the University of Toronto).

First, let me state for the record that I have read Jennifer Peto’s thesis. I believe the hypothesis of her thesis is legitimate matter for serious investigation; do particular education programs (in this case Holocaust education), promote a particular worldview? There is no difference between asking this question about Holocaust education and asking it of the curriculum taught by the Taliban in Afghanistan, the Communist Chinese government’s official curriculum, the Creationist movement in the United States or the textbooks of the Palestinian Authority. Just because we may or may not agree with the politics of something does not exempt it from study.

The obligation on any scholar (and on the advisor of a student scholar) is to ensure that the topic is handled professionally and treated properly, according to rigorous academic standards.

I think many, if not most of us who have bothered to read this thesis have rightfully concluded that the author doesn’t even come close to proving her hypothesis, let alone following usual academic research standards. In fact, she makes it clear that she isn’t even going to bother trying, having stated that white Jews have no right to even be engaging in these kinds of educational programs to begin with (I refer you to the last paragraph on page 46 of her thesis in which she explicitly states this). The paper reads like it is somewhat of a narcissistic, self-aggrandizing journey in which the author references only a limited scope of literature and performs no original research to investigate a very difficult subject. In fact, she admits that she ‘didn’t have time’ to crosscheck her ‘observations’ of web-based materials by actually talking to anyone.

However, notwithstanding the questionable value of this particular work, I am also very perturbed by the withering attacks on OISE (and by extension, UofT), especially through the pen of several journalists and many web ‘commentators’, and Werner Cohn’s superficial investigation of theses abstracts (which cannot be the basis for condemning a whole institution).

First of all, there is nothing wrong with studying racism, colonialism, patriarchy and feminism, homophobia, or aboriginal and African experiences. And there is nothing wrong with incorporating reflective processes into one’s scholarship. Calling them ‘leftist’ or ‘politically correct’ is just plain ignorant. They are legitimate and important subjects of study and should not be minimized the way they are being treated in the populist press.

The problem isn’t the subject matter, as many have construed. Just because the academy may be infiltrated here and there by bigotry and fascism, and have ‘members’ who seek to use the cover of scholarship, and expropriate the language of anti-racist and human rights education to mask their own hatred and racism, doesn’t nullify the work of the academy as a whole.

OISE may (emphasis on “may”) be subject to some of this phenomenon, but this is a universal problem far beyond OISE. I have had personal dealings with some of this in the past and it’s not very easy to find the fortitude to deal with the rhetoric and angry self-righteousness contained in the work, but it is possible (a typical strategy is to condemn anyone who offers even a reasoned critique). In order to do so, we must apply the same academic standards of inquiry to their work as we demand of it, and expose the problems to the light. At the very least, a thesis or paper cannot be condemned without actually reading it.

By judging without reading, and by issuing sweeping condemnations against the whole institution, we are throwing away far more examples of legitimate work, including many outstanding theses that have helped shape positive contributions to education generally, to anti-racist education more specifically, the study of genocide and, yes, Holocaust and Shoah education in particular. Reading the recent populist media attacks on OISE in light of the Peto thesis leaves one questioning all work coming out of OISE, which is an absolute travesty.

The Provost of the University of Toronto, Prof. Cheryl Misak, has been quoted in the media as saying that freedom of inquiry lies at the very heart of the institution. I could not agree more. Let us examine each piece of inquiry and each scholar’s work individually with the freedom we all have to do so (Peto’s thesis along with others is available for free download over the Internet), rather than condemning the whole institution and throwing out the baby with the bathwater, as the old saying goes.