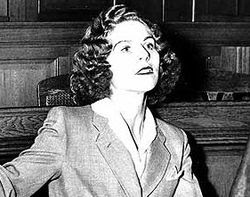 Here is an excerpt from my revised Prolegomena for the Study of Jews Who Hate Israel:

The history of our dolorous subject starts at least as early as Biblical times when, already, there were individual Jews who hated being Jews and tried to do something about it; see, for instance, Deuteronomy 13:6-11. And of course all books on Jewish history, and even Wikipedia, have lengthy disquisitions under the rubric “apostasy.” In modern history there were even a few individual Jews who, usually under great pressure, saw fit to collaborate with the Nazis in the annihilation of their fellows (see, for example, Stella by Peter Wyden, the story of a young Jewish woman who helped the Nazis catch fellow Jews in wartime Berlin).

Obviously the individual Jews who set themselves apart from their people do not all fit into one neat little category, and of course the circumstances of the unfortunate Stella Goldschlag (who had herself baptized a Christian, and later committed suicide) is very different from the "ashamed Jews" of today, as described by Howard Jacobson in his novel The Finkler Question. Nevertheless, I propose that a broad interest in the topic will have to include all such types.
Posted by Unknown at 11:59 AM

I have sent you a story about La Pantera Nera, the Jewess who was paid for each Jew she turned over to Kappler.

Rosselini even had her in Roma, Cita Aperta.

they are not just regular ashamed, they are proud to be ashamed!