Sir Gerald Kaufman mutters "Here we are, the Jews again" as a fellow MP rises to speak, but for the life of him, Sir Gerald cannot remember a thing 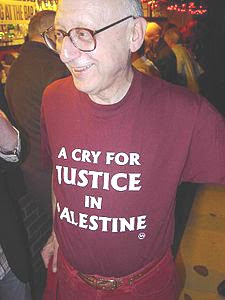 Sir Gerald Kaufman, M.P.
Sir Gerald Kaufman, Jewish but, as he is happy to report, a good friend of the late Yasser Arafat, has frequently suggested that Israel is just like Nazi Germany. He has also said that while he is not overly fond of Hamas he supports it as against Israel, since, as he puts it, Hamas reminds him of the Jews who fought against the Nazis.

As is well known, it is one of the central conceits of the JAIs ( Jews Against Israel) that they and they alone love the Jews and that is why they are against the "Zionists." Are they in fact anti-Semitic ? That is something often asked but always furiously denied by our JAIs, at least by those among them who have the ear of the press. No no no, the professed doctrine goes, we are not against the Jews, on the contrary. We are against the Zionists. Period.

Now yesterday, March 30, as the (pro-Israel) Labour MP Louise Ellman rose to speak in the House of Commons, Sir Gerald leaned over to other MP's nearby and said: "Here we are, the Jews again." Kaufman said later that he and Ellman often disagree. And what is it that they disagree about ? Is it that Ellman is a "Zionist" ? Well, not according to the plain language of his utterance, as it was heard by a number of MP's. What he does not like is that she is Jewish. The fact that he himself is also Jewish makes this kind of anti-Semitism illogical, but logic is a restraint only on people who are guided by a modicum of reason.

Sir Gerald's reasoning is poor, but so, apparently, is his memory. Interviewed by the press later, he said "I can't remember whether I said it or not. I can't remember every comment I said under my breath." Nevertheless, apparently under pressure from the Labour leadership, he had the following statement released: "I regret if any remarks I made in the chamber caused offence. If they did, I apologise." The word "if" appears not once but twice in this laconic non-apology.

Here is the story as it appears in the Jewish Chronicle.

Thanks to Paul Bogdanor for calling my attention to the incident.
Posted by Unknown at 8:53 PM