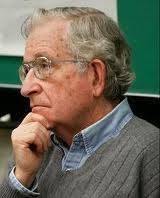 "Wer die Wahrheit nicht weiß, der ist bloß ein Dummkopf. Aber wer sie weiß, und sie eine Lüge nennt, der ist ein Verbrecher!" ('He who does not know the truth is merely an ignoramus. But someone who does know it while calling it a lie, that person is a criminal.') - Bertolt Brecht
Noam Chomsky is now eighty-two years old. He is an academic linguist, but for the last half century the bulk of his considerable energy has been devoted to his two grand passions: his hatred of American society, and his even greater, enduring and consuming hatred of Israel and the Jewish people. And yes, his problems with veracity have remained as troubling as ever.

Partners in Hate. Noam Chomsky and the Holocaust Deniers
There is now an "official website" of Noam Chomsky's which republishes many of his offenses against the truth over the years. Stuart Easterling, according to the site, is the person in charge of it.
The list of Chomsky's prevarications is long and depressing, and it would be tedious to rehearse it here ("The top 200 Chomsky lies" have been described by Paul Bogdanor). But I have had a personal brush with Chomsky which, despite the years that have intervened, is kept current by him and/or his supporters, and therefore worth describing now.
It began when I detailed, back in 1985, Chomsky's active collaboration with the French Holcaust-denial group La Vieille Taupe (VT) which was then led by Pierre Guillaume, Robert Faurisson, and Serge Thion.
After Chomsky and Edward Herman published their "Political Economy of Human Rights" in 1979, the problem came up of who would publish a French translation. Pierre Guillaume wrote an account of his friendship with Chomsky (in an essay "Une mise au point" in a volume "Droit et Histoire") that shows Chomsky eager to help VT and Guillaume by allowing them to publish this translation of the Chomsky-Herman volume. Guillaume relates that Chomsky could have had a main-line publisher do this but refused, specifically to help Guillaume and VT.
After I published my report of the Guillaume essay, Chomsky -- in a letter to a Canadian Communist journal and then in a personal letter to a correspondent -- says that he read the Guillaume essay and that it contains nothing at all remotely relevant to the issue of his book. Moreover, Chomsky maintains, Cohn is a "pathological liar." These Chomsky letters are now part of Chomsky's "official website."
Chomsky also maintains that the French version of his book was not at all published by VT, but rather by the "mainline" publisher J-E Halier/Albin Michel. The truth of the matter, as explained by Guillaume, is that he, Guillaume, directed this publication for Halier/Michel. Moreover, the catalog of the Bibliotheque National in Paris lists the book as published by Hallier / Michel, in a collection Le Puits et le Pendule, which, it explains, is directed by Pierre Guillaume at La Vieille Taupe:

So Cohn is a "pathological liar." Guillaume did not say at all what in fact he did say. And the catalog of the Bibliotheque National in Paris ? Also part of a Zionist conspiracy against Noam Chomsky ?
I have collected all the details here, including links to the Guillaume essay in both French and English. (The catalog entries at the Bibliotheque Nationale, which I have just now discovered, are new at the present blog posting). Of course this dispute is more than twenty years old, and I could surely be excused for dropping it -- if it weren't for the fact that Chomsky's "official website" continues to call me a "pathological liar" and also maintains that I have never "dared to respond" to Chomsky on this (see here and here). So I wrote a polite request to Mr. Stuart Easterling, the person in charge of the "official website," requesting that he furnish his readers with a link to my responses to Chomsky. And no, Mr. Easterling has not deigned to reply.