George Marlen's Ghost at the University of Toronto 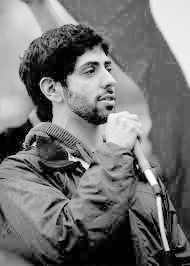 Corey Balsam
Yet another diatribe against Israel from the University of Toronto, again in the guise of an MA thesis,  using the time-honored methods of the late George Marlen.  Reviewing another work, I had occasion to describe the Marlen method as follows:

The method he uses, the Marlen Method of Great Insight (MMGI), is so named to honor George Marlen, a Trotskyist thinker of the 1940's. Marlen discovered that World War II was not a real war at all. It was a hoax, Marlen discovered, perpetrated as a conspiracy of the German, British, and American ruling class to fool the workers of the world. It was a phony war from beginning to end. Professor Noam Chomsky, among others, has testified to Marlen's importance to his own thinking.

MMGI can prove any idea that the powers that be wish to suppress. MMGI can be used, and indeed has been, to prove that the world is flat, that Napoleon never existed, that the moon is made of green cheese, that Zionists are really Nazis. This is how MMGI works. First and foremost, you decide what it is want to prove. Anything will do, as long as it is an idea that most of the world would find preposterous. Next, you go to a big library (Marlen worked at New York Public), you consult hundreds of books, you carefully write down on little pieces of paper any phrase, factoid, or even single word that fits into your pre-determined idea. Finally, you publish or at least self-publish your idea, buttressed by all these little papers you have taken from the library, and, voilà, you are a fearless, independent, scholarly thinker, and will gain, at the very least, a dozen people who think you're great.

The work at hand here is called "The Appeal of Israel: Whiteness, Anti-Semitism, and the Roots of Diaspora Zionism in Canada." It is written by a young student named Corey Balsam and supervised by Sheryl Nestel, a professor at the U of T's Ontario Institute for Studies in Education (OISE).  Nestel has supervised a number of similar theses over the last two years. (See my previous postings on her and OISE.)


True to the Marlen tradition, there is no scholarship in this thesis.  There is an appearance of scholarship -- footnotes and bibliography -- but none of its substance.  I will give but three examples of its many flaws:
1)  Although accepted in a department of sociology, there are no social science methods in evidence.  The author presumes to tell us something about the state of mind of Canadian Jews but at no point is there any reference to the many empirical studies of Canadian Jewish attitudes. (Quantitative methods seem to be completely absent from OISE sociology.)
2)  The author insists that aspiring for "whiteness" has something to do with how Canadian Jews think.  How would he know a thing like that ?  This concept -- whiteness -- is not, as far as I can tell, one that Canadian Jews employ to describe themselves, and the author does not claim that they do.  It is something that he imputes unto them.   Several OISE theses have used this term;  it is a piece of in-jargon at the Institute.  (That, and other such jargon, establish OISE as a cultist organization).  Stripped of its verbal acrobatics, when these OISE writers use "whiteness" they mean racist.  Together with the other theses on Jews that Nestel has supervised at OISE, Balsam asserts that  North American Jews are racist, no more, no less.  All this, moreover, in the face of actual empirical studies that show the very opposite to be true.
3)  True to Marlenite methodology, the author likes to refer to other writers whenever these seem to agree with his thesis.  One of his authorities is particularly instructive:   Shlomo Sand's anti-Israel screed  "The Invention of the Jewish People." This book holds that the very notion of a Jewish people is a Zionist propagandist lie. Sand is described by Balsam as an "Israeli historian," forgetting to mention that Sand is a specialist in modern France without any background whatever in either ancient or medieval history, nor indeed in genetics, all subjects that he claims to master.  Sand's book was published in English by an anti-Israel group, and has been wildly applauded by political groups hostile to Israel.  The specialists who have written about it, for example Martin Goodman of Oxford University and David Nirenberg of the University of Chicago, have said that the book is the work of a charlatan.  But to Mr. Balsam,  Sand remains an unchallengeable authority.

4)  Most of all:  the tone, the announced intentions, the atmosphere of this essay run counter to even the most relaxed canons of scholarship.  There is no curiosity, no spirit of enquiry. The author obviously has little interest in the ostensible subject of his thesis, the Jews of North America.  He opines about things in general and concocts a mock-radical theory of capitalist society.  He goes on and on citing  Freud, Fanon, Foucault, Gramsci.  It is a huge mumble jumble of sloganeering and half-digested ideas from others, without any apparent relevance to Canadian Jews.  Is there a point to all this, beyond his apparent interest in impressing his cultic teachers and comrades ?  The only point seems to be this one:  look how radical, how anti-racist, and especially how smart a thinker I am.


Mr. Balsam has of course every right in the world to think as he does, to be as pretentious as he wants to be, to write as he does, and to work, as he says he does, against Israel.  Obviously Ms. Nestel, his sponsor, has all these rights as well.  But none of this makes Balsam's a work of scholarship in any sense whatever.  For OISE to say otherwise is a piece of legerdemain.
So, University of Toronto, for how long, for how long will you allow the OISE rot to undermine your academic credibility ?
hat tip:  Richard Klagsbrun
Posted by Unknown at 4:37 PM