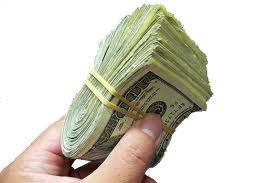 The Nation magazine, under date of September 30, is indignant that the Tea Party, apparently, does not reveal its donors adequately.  Nation writer George Zornick wants to "force [the] secret donors into daylight." Do I agree ?  You betcha.

But, guess what, The Nation itself clouds its finances in a most unusual and extreme secrecy.  It avoids financial disclosures to the IRS by being a "limited partnership," not a non-profit entity, so neither the government nor the public can have an insight into the identity of the donors who keep it afloat.  It is claimed that some thirty percent of its revenues come from these sources, but there is no independent verification of this or of any of the magazine's financial data.  What we do know is that, not being a registered non-profit organization, donations to The Nation are not tax-deductible.  In other words, the magazine is willing to forego the very substantial financial advantages of tax deductibility for the sake maintaining an absolute secrecy of its contributing angels.

(The Nation magazine has undergone a number of incarnations, some of which were perfectly honorable.  In this article I deal only with its current one, which, it would seem, began with the editorship of Victor Navasky at the end of the 1970's. For an assessment of the magazine as of 1951, see the article by Granville Hicks, "The Liberals Who Haven't Learned," Commentary, April 1951)

Who might want to be an angel to this Nation ?  And why would such a person, or entity, hide his generosity from the "daylight" of public knowledge ?  To get an understanding of such questions, it is instructive to review some of the magazine's more notorious articles of faith, to wit:

1. The Stalinist movement, in balance, was a "progressive" force, working for the benefit of mankind.  So Stalin's most steadfast American supporter, Paul Robeson, is one of the fifty greatest American "progressives" of all time, as is his comrade in arms, I. F. Stone.  Julius and Ethel Rosenberg, far from being some sort of criminals, were idealistic American "progressives."  And so on.

2.  When it comes to the conflict between the old Soviet Union and the Jews who attempted to escape from it, guess who was in the right ?  Well,  The Nation weighed in on that one on March 1, 1986, under byline of  Mr. Alexander Cockburn.  It is true, at least according to Franklin Foer, that this Mr. Cockburn does not much like Jews to begin with.  But even so, this article was extraordinary.  The immediate issue  was that of the famous refusenik Nathan Sharansky, who had languished in the Gulag for many years on trumped-up charges.  Mr. Cockburn opined, contrary to the views of just about everyone else outside the KGB,  that Sharansky was most probably "an American spy."   I must say that when I first saw this article some twenty-five years ago I thought that the The Nation had been taken over by psychopaths;  my subsequent occasional forays into its pages haven't changed this impression to any substantial degree.  (For anyone interested in the details of the Sharansky case, there is the definitive  600-page analysis by the Canadian law professor Irwin Cotler.)

3.  Israel is always in the wrong.  While The Nation has never explicitly endorsed the popular Arab slogan "Death to the Jews," the import of what the magazine has to say, week after week,  is not far from this.  When the magazine wrote one of its routine attacks on Israel in connection with the Gaza "flotilla" of 2010,  there was a protest from a surprising source:  Eric Alterman, himself a left-wing critic of Israel and indeed a columnist for The Nation.  "This editorial," he wrote, "like most Nation editorials on the topic, simply assumes that Israel is 100 percent at fault in this conflict, and that whoever opposes it is 100 percent correct."

Now, in addition to perhaps some unreconstructed old Stalinist lately come into a bit of cash, which person or entity, foreign or domestic, would care to finance this kind of ranting and raving and malicious insinuation, week in week out ?  And who would do this without any kind of tax benefit to himself, being rewarded only by having his bad deeds clouded in the deepest of secrecy ?  Well, to ask the question is to answer it, isn't it.

I think you discovered Stalinist secret "angels" that may not exist.

The Nation [magazine] is more transparent than most. Every year they publish names of thousands of their donors,listed by relative size of contribution. It is printed in very small print, but you can use a magnifying glass to see all the "dirty commies".

Over the years, The Nation has had some big "angels," but they were not really hidden. I remember meeting Hamilton Fish, and he wasn't shy about public disclosure that he used his money to support the magazine under Victor Navasky.

What is your favorite magazine, and are they more transparent than The Nation?

As far as supporters of Stalin, I knew quite a few back in the day, and only one wrote for The Nation (he can no longer be described as such). I heard lots of commie criticism of The Nation. You may need to acquire a more nuanced understanding of politics. I'll bet more ex-communists have written for National Review than for The Nation.

Anyway, why should anyone fear disclosure that they support The Nation? Do you have unpleasant plans for us?

Bill
(You can look my name up in the pages of The Nation.)

Yes, "Bill," that is being completely transparent. You submit your comments as "anonymous," then sign as "Bill," and conclude that "you can look up my name in the pages of The Nation." What could be more transparent than that ? Maybe the files of the KGB in Stalin's time ?

I remember reading an article in the Nation in 1980 or 1981 that left my jaw dropping. I remember it to this day. It purported to show that there was no antisemitism in the USSR. I'm not kidding.

The article described an incident in which a Jewish guy in the Soviet Union was the butt of antisemitic insults in the street by one or more non-Jews. In front of a crowed, someone came eloquently to the Jew's defense. That was it. I couldn't believe what I was reading. Was anyone stupid enough to be influenced by this? Apparently so.