The Puzzle of Adass Jisroel: A Sham Synagogue in Berlin 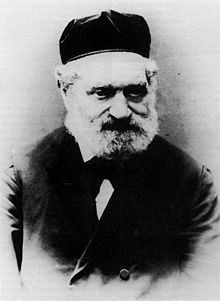 
Rita and I spent a week in Berlin last month.  Most of the time was spent visiting the small Jewish institutions, and the exercise was more than a little depressing.  In short, there is no continuity at all with Berlin Jewish life before the War.  Of course this was no surprise.  But there were some features that were startling to me:  much of what is ostensibly Jewish is in fact run by non-Jews.  A recent article in the Jerusalem Report, "Jewish Newspapers without Jews," shows how ostensibly Jewish newspapers in Germany are in fact largely run by non-Jews, and are apparently also read mostly by non-Jews.  The same holds true for other ostensible Jewish features of today's Berlin.  There are Jewish symbols and Jewish titles for this and that, but there are few if any actual Jews behind some of these.

A very conspicuous example of this make-believe is the continued existence, in the eastern part of the city, of what amounts to a sham synagogue.  It was established by the Communist government in the final phase of the so-called German Democratic Republic and has had a continued existence in post-Wall Berlin, not only through the stealth of its promoter but also through the complaisance, fear, and cowardice of the authorities and the media.

The story has been told a number of times, most notably by the well-known German Jewish journalist Henryk Broder in a (German-language) article in 1991.  But there has been little attention to the matter in English,  which alone could bring the matter to the attention of the Jewish community world-wide.  (But see my link to the important work by Ruth Gay, below).   Moreover, Broder's article and similar exposés are now twenty years old.  I have suggested an up-to-date  and in-depth inquiry, with the understanding that the results would be available in English as well as German.  Here is the fundamental question:  is there any legitimacy to the claim that this new Adass Jisroel is a continuation of the old Adass Jisroel ?  That is has any of the characteristics of the old Adass Jisroel, any at all ?

The original  Congregation Adass Jisroel (עדת ישראל) was formed in Berlin in the second part of the 19th century by Rabbi Ezriel Hildesheimer and his Orthodox co-thinkers.  They left the Unified Jewish Community, which, then as now, included both Orthodox and Liberal Jews, because they wanted a stricter Orthodoxy in their own religious life.  They were secessionist, wanting neither government nor Community supervision, and, for the sake of their religious convictions,  they forewent government and Community subsidies.  As it happens, their intellectual and cultural achievements -- I speak as someone who (as a child) only observed them from afar, as an outsider -- were extraordinary.  The famous Adass Schule at Siegmunds Hof in my old West Berlin neighborhood operated from 1924 until it was destroyed by the Nazis in 1938.  It taught not only the Orthodox Jewish religion but also excelled in secular subjects, following the founders' dictum of Torah im Derech Aretz, i.e. a devotion to both Torah and secular learning.  At its last Abitur in 1938, the (Nazi) government examiner was moved to compliment the graduates on their unusual scholarly achievements. Not longer after that, of course, the Nazis proceeded to send the bulk of these graduates to their death, together with the other remaining German Jews.

There is not much to tell about the succeeding years.  The East Berlin AJ synagogue was destroyed during the war, and nobody from the old AJ, or from anywhere else, appeared to take an interest. In West Berlin, of course, there was a functioning Unified Jewish Community, consisting mainly of Russian Jews and a few other individuals from here and there.  In East Germany, tiny Jewish congregations existed in some places, by the sufferance and/or sponsorship of the Communist regime.  That is until about 1986.  At that time, Ari Offenberg, a grandson of one of AJ's founders, appeared in East Berlin together with his son Mario, to be designated by the Communist government as the rightful and legitimate resurrected Congregation Adass Jisroel.  There were no other members in sight.  Nevertheless the GDR government, with the personal approval of its lider maximo, Genosse Erich Honecker, proclaimed the Offenbergs as the legitimate, the continuing Adass Jisroel.  Father Ari, however, remained in the background like a piece of stage prop.  It was Mario, the son, who was and has remained as the star of post-war Adass Jisroel.

Once the Berlin wall fell and the city was re-united, Mario lost his GDR protection and his GDR subsidies.  But he was undeterred.  He launched a five-year litigation against Berlin's Senate for the recognition of his AJ as a Jewish Community with equal status to the Unified Jewish Community, and, not coincidentally, for renewed subsidies from public sources.  And after these five years, on October 15, 1997, he was given all that by the highest administrative court.  Since then he has vocifirously campaigned against any and all who dare to question his bona fides, never hesitating to label his critics as anti-Semites, Stalinists, greedy Jewish oligarchs, as the case demanded.  In the end, the Unified Jewish Community has declared some sort of a truce, under the theory, as one person explained it to me, that it is best to letting sleeping dogs lie.  Offenberg has been sufficiently aggressive and media-savvy to intimidate all the various authorities of today's Germany.

Mario Offenberg was born in 1946 in Tel Aviv and apparently served in the Israeli army, so of course he knows modern Hebrew (which, it goes without saying, is not the same as having had a Jewish religious education).  In the late 1960's he migrates to Berlin with his father, and studies there at the Free University.  In 1975 he completes his thesis, which, as Ruth Gay explains,  was an attack on Zionism.  In 1977 he makes an anti-Israel movie, which receives an award from the PLO.  His politics were anti-Zionist Trotskyism in those years. In 1975, he collaborates with Eike Geisel to translate into German an anti-Zionist pamphlet by the Trotskyist Nathan Weinstock. Together with Moshe Machover, he publishes an article in 1978 in the Israeli Trotskyist publication Khamsin, in which he attacked anyone on the Left who might support Israel.

What did the Jewish religion -- not to mention Orthodox Judaism -- mean to him in those days ?  Henryk Broder interviewed a comrade of his from those days, who said that Ollenberg, at least at that time, was as much religiously Jewish as he himself was Santa Claus.

Now of course people can change.  We know that Saul experienced an epiphany and became Paul.  Moreover, we are also told that there is more joy in Heaven over one sinner who repenteth than over ninety-nine who have no cause to repent.  Did Mario Offenberg, like Saul,  have some sort of epiphany ?  Did he repent of the radical Trotskyism of his youth and middle age ?  Well, when Henryk Broder asked him about it, Dr. Offenberg opined that his time is much too valuable to discuss matters of that sort.

In the meantime, this new Adass Jisroel continues to exist, at least on paper.  No rabbi is mentioned on its website.  It runs what it calls a kosher restaurant, but when I visited this establishment last month there was no Jewish personnel to be found in it.  All inquiries are to be directed to its office, I was told.  But this office, when I tried to visit it, just happened to be closed, as it also happened to be closed when others tried to visit it.  AJ is said to have a synagogue, but attendance there is allowed only by appointment.  The large AJ cemetery, which was given to Offenberg by the GDR government, cannot be visited except by appointment;  people I know tried to make such appointment but were told that 6:30 in the morning is the one and only time for which an appointment can be considered.

Last year there were press stories that the Berlin government is demanding proper accounting of the funds that it has channelled to Offenberg, as required by law, but apparently refused by Dr. O.  Then the story was quietly dropped.  When I was in Berlin now, I met with a reporter from one of the Jewish papers (who, of course, was not Jewish himself).  I was interviewed most courteously, and a most courteous account of my visit was published.  But there was not a word about the main interest that I expressed in the interview, viz. Adass Jisroel.  The reporter later told me why this was red-pencilled by his editor:  let sleeping dogs lie.

UPDATE, March 26, 2012:  It now seems that a new court judgment has recognized the fraudulent nature of Offenberg's operation, and that this so-called synagogue may well be forced to shut down.
Posted by Unknown at 4:14 PM

We requested a visit to pay respects at family graves and were graciously given an appointment at our convenience. I am a descendant of an Adass Yisroel family and the writer here is quoting hearsay and is just a muckraker

Thank you, Ms. Friedman, for letting us know that you have succeeded where others have failed, i.e. to visit the AJ cemetery. BTW, did you know that it's possible to disagree without becoming disagreeable ?

Werner, great article. Years ago I read "Partners in Hate" and I immediately understood that you're a voice of reason in a wilderness of stupidity. As per the previous commenter, I have no idea why people are gratuitously nasty or as you politely call it, being "disagreeable."