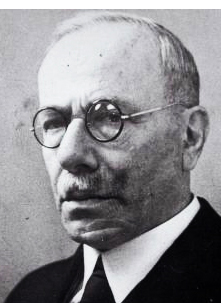 
My German Jewish parents, in Berlin, were about as assimilated to German society as one could be.  They almost never visited a synagogue.  They spoke no language other than German.  They thought that Jews who had immigrated to Germany from Poland were, speaking politely, ungebildet, uncultured.  And about Zionism, they held a polite but firm distance.  Until about 1934, Christmas was celebrated in our house, to be replaced by Hanukah only after Hitler taught them, around 1935, that we were, after all, Jewish.

But despite these German proclivities, the word Naumannianer (follower of Max Naumann) was always a term of derision in our house.  A Jew who tries to be a Nazi ?  Verrückt.  Crazy.  And that may well be the most charitable judgement that history now has for Max Naumann, founder, protagonist, and leader of the Verband nationaldeutscher Juden (VnJ).  One of the very few Jewish line officer in the Kaiser's Army, Naumann felt strongly that he was German, very very German, right-wing German, and he felt gravely hurt that the emerging right-wing movement of young Germans after WWI considered him, a Jew, to be outside their Volk.

Solution:  a movement, VnJ, started in 1921, with the following theory:  yes, it's true, many Jews are in fact Schweinehunde, just as the anti- Semites say they are, but those are the Ostjuden, the Jews from Poland and parts East, not the truly deutsche Juden (us), who are in fact good Germans, very good Germans.  So Naumann advocated: a) true Germans like himself need to vote for the  Nazis (in 1932); b)  Eastern European Jews need to be expelled from German territories; and  c) (once the Nazis were in power), the Zionist Organization of Germany needs to be outlawed.   Dr. Naumann also sent a personal letter to Hitler (retrieved by my late friend Klaus Herrmann), which respectfully suggested to the Führer that the good German Jews (but not, of course, the Jews of Eastern origins) be drafted into the Wehrmacht together with their Aryan Volksgenossen.  Since the Führer never deigned to reply to communications from members of inferior races, Dr. Naumann's letter remained unanswered.  However, the Nazi government took enough notice of the VnJ to make sure that it was outlawed before other Jewish groups.  Dr. Naumann was briefly arrested but was then released to die a natural death in 1939.

We now live in times of renewed onslaught against the Jewish people, and Naumann-like characters have again arisen to to urge the enemies of the Jews to proceed more energetically than these enemies are inclined to do at the moment.  In the video below, we have a Dr. Norman Finkelstein, no less a Doctor than Naumann, urge the Hezbollah to act with greater military resolve against Israel:  "Israel has to suffer a military defeat," he opines.

Has Doctor Finkelstein heard of Doctor Naumann ?  That is not likely, given Doctor Finkelstein's reluctance to give much thought to Jewish history.  But that is neither here nor there.  The two Doctors are related by a common commitment to harm their own people.