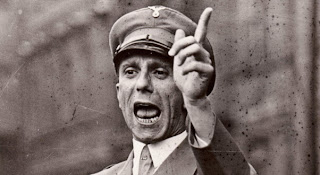 One of man's most persistent traits is hate.  Is it an "instinct" and absolutely universal in the human species, or is but a response to frustration, as the "frustration-aggression" theorists would have it ?  While varying in degree and type among cultures and individuals, one would be hard put to find humans altogether without it.

It also seems clear that certain groups and individuals seem to have more than their share.  In fact -- and this is the subject of this blog posting -- there are organized movements that specialize in the theory and practice of fostering enmity and hate.  The historical examples are of course clear:  pre-eminent among them are the totalitarian movements of the last century.  But I will not focus on these here.  Instead, I propose to turn attention to some examples in contemporary America.

World literature has some outstanding haters, and it would seem that the enmity groups of today have been inspired by these, at least in part.  (I have looked in vain for something like a history of vituperation among the famous writers of the past, but,  as far as I can detect, a book like that is no more than a desideratum.) Some of the great haters of the past include, at a minimum, Martin Luther, Karl Marx, Vladimir Lenin, and Adolf Hitler.

Hatred against Jews is prominent among historical hatreds, but it is not the only such enmity that is captured in the great literature of the past.  Be that as it may, in the case of Luther and Marx (and of course Hitler), it plays an outstanding role.

As to Luther, according to Wikipedia:


Luther describes Jews as a "base, whoring people, that is, no people of God, and their boast of lineage,circumcision, and law must be accounted as filth."[1] Luther wrote that they are "full of the devil's feces ... which they wallow in like swine,"[2] and the synagogue is an "incorrigible whore and an evil slut".[3]

And here is Karl Marx:


Let us consider the actual, worldly Jew – not the Sabbath Jew, as Bauer does, but the everyday Jew.
Let us not look for the secret of the Jew in his religion, but let us look for the secret of his religion in the real Jew.
What is the secular basis of Judaism? Practical need, self-interest. What is the worldly religion of the Jew? Huckstering. What is his worldly God? Money.
Very well then! Emancipation from huckstering and money, consequently from practical, real Judaism, would be the self-emancipation of our time.

Most of the descriptive literature of these classic haters mentions their violent, vituperative, vitriolic polemical style.  But this style is usually considered as no more than an aspect of the particular issues of the time.  I think that it deserves a treatment all of its own.  I think that this style, in its radical disregard of the personhood of its targets, often seeks no less than the physical annihilation of enemies.  Wishing the death of opponents, and the attempted and sometimes accomplished murder, are fairly common features of the hate groups, as we shall see.

When we come to enmity groups in contemporary America, it would seem that certain religious and political sects give us the most conspicuous examples.  None of these groups are very large, but neither are they, in their totality, too insignificant to deserve attention.  (There are also enmity groups that cannot easily be described as either religious or political -- e.g. Scientology and the Larouche cult -- for which there are ample descriptions on the internet.)

The Westboro Baptist Church of Topeka is perhaps the most extreme example that one can find of an enmity group.   Their in-the-face hate picketing in various parts of the country -- "God Hates America," "God Hates Israel," "Fags Eat Poop," -- give the impression of parody, but that does not seem to be the intention.  Their latest antic was to declare that "God Sent the Shooter" at the funeral of Sandy Hook victims.

Not all groups that start out as hate groups remain so forever.  The Jehovah's Witnesses of the 1930's certainly promoted enmity.  Their favorite slogan -- "Religion is a Snare and a Racket" -- was used by them to shock Catholics.  On one occasion, June 25, 1939, there was a bloody brawl between JW members and those of another hate group, Charles Coughlin's  Christian Front.  These combative years of the Witnesses seem to have been confined to those of J. F. Rutherford undisputed leadership (1917-1942).

A number of other religious sects have enmity practices that are mostly internal:  one faction opposes another, using extreme verbal violence that sometimes becomes physical assault.  We have such reports regarding Satmar Hasidim and occasionally other Hasidic groupings.  And back in 1933, the American-Armenian Archbishop Leon Tourian was assassinated in New York by members of an opposing Armenian faction.  And so forth.

One religious enmity group, or rather a set of such groupings, are known as the Closed Brethren divisions of the larger Plymouth Brethren movement.  These Closed Brethren, best described by the late Bryan R. Wilson in a series of publications, have now been with us for almost two hundred years.  Their history is one of holier-than-thou and mutually antagonistic grouplets, marked by excommunications, shunning, and extremely hateful language toward one another.  The fact that their numerous antagonisms concern mainly their inner politics, and also the fact that -- as far as I know -- there have been no reported cases of physical violence, would explain why these people have not generally attracted the attention of mainline media.

Coming now to the more political enmity groups, there are of course the classic haters like the Ku Klux Klan, the neo-Nazis, etc.  Their hatreds are well documented and obvious, and need no more discussion here.

The old American Communist Party, on the other hand, is not conventionally classed as a hate group.  And perhaps, if it were not for the excellent writings of some ex-Communists, most of us would simply not know about the culture of enmity in the old CP, i.e. in the years of its virulence, roughly from 1930 to 1960.  (The Party today is of course but a pale shadow of its past, and I do not discuss its current situation here.)

The historian Aileen S. Kraditor, having spent about a decade in the CP beginning in 1947, published her remarkable book "'Jimmy Higgins', The Mental World of the American Rank - and - File Communist" in 1988.  No other work, to my knowledge, has given us as much detailed and insightful information about the Party's internal atmosphere of hatred, which was directed as much against perceived "renegades" as against the ostensible main enemy, capitalism. Kraditor devotes her fourth chapter specifically to "the rationale of hate" in the Party, a hatred which, from time to time, explicitly called for the death of opponents.   And she quotes from a 1937 article in a party journal:


It is from Marx we inherit the quality of fierce partisanship rising from objective historic analysis ;  his writings live today not as disembodied , cold philosophy, but, because of their intensive scientific objectivity, bright with the fires of hatred for the oppressors, which is but the other aspect of love for the working class and its vanguard.

The old CP is dead, more or less, but Marxist-Leninist enmity promotion still lives in America. It seems most virulent today in a group that had been a prime target of Stalinist hatreds, the Trotskyists.

Now as ever, Trotskyism is divided into numerous quarreling little sects, much like the Esclusive Brethren mentioned above.  Many of these groupuscules have been around for years, others arise and fall because of splits and mergers, and some seem to die due to pure exhaustion.  But there is one group, the International Socialist Organization, that, more than any of the others, seems to show signs of energy at the moment.

The ISO is "Cliffite," e.g. it adheres to that branch of Trotskyism that was founded by the late Tony Cliff of the British Socialist Workers Party.  Unlike most of the other Trotskyist groups, the Cliffites did not defend the Soviet Union as a "workers state," insisting, instead, that it was marked by "state capitalism."  But while it was thus more reasonable in regard to Stalinism, Cliffism has been,  at some distance, the most rejectionist about Israel in this overall anti-Israel group of organizations:  for the Cliffite groups that there is no right of Israel to exist, no matter how tiny its borders. The issue is discussed here by one of the SWP"s Trotskyist rivals in Britain, Workers Liberty.

The verbal violence of the ISO is remarkable, certainly for a post-Stalinist organization.  Here is a video of an ISO meeting last year in Chicago


ISO's Comrade Sherry Wolf tells us that she wants to "piss on Reagan's grave" (see below at 33:24)

Over in England, the Cliffites have a friend and collaborator in the House of Commons, the Honourable Gentleman from Bradford West,  Mr. George Galloway.  Here he appears at a debate at Oxford, February, 2013

Finally, we have a talk on the website of the New York ISO branch that features Ms. Lannis Deek, an Arab-American lawyer and supporter of Hamas,  in which she claims that "Zionists" like David Ben Gurion have advocated and practiced the cold-blooded, indiscriminate murder of Palestinians:


Comrade Deek purports to cite Ben Gurion.  I have been unable to receive a reply from her when I inquired about the source of this alleged quotation.  The text is, however, listed in a compendium of false "Zionist" quotations that has been made available by CAMERA.  Comrade Deek is a member of the NY State Bar, whose Rules of Professional Conduct (Rule 8.4(c)) prohibit a lawyer, ISO member or not, from  "[engaging] in conduct involving dishonesty, fraud, deceit or misrepresentation." She may wish to review these Rules.

The history of enemy groups -- which I have tried to sketch from Martin Luther to, if you will excuse me, Lannis Deek -- is obviously part of our tradition, and is unlikely to end in our times.  I offer these comments in the hope that a greater understanding of such groups will help to mitigate the harm that they do.


The Language of Hate: Animal Attributions

Posted by Unknown at 6:19 PM No comments: